If TV has taught us anything, it has shown that highlight clips are both an easy and popular way of filling some space. So dug into Google Analytics to see which of out maps/postings have received the most hits. Not necessarily what we've put the most work into (see our publications for that) but a People's Choice sort of a thing.

Enjoy them again or for the first time...click on the maps to see the original post.

#1 The Beer Belly of America 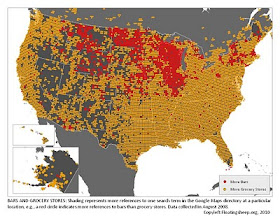 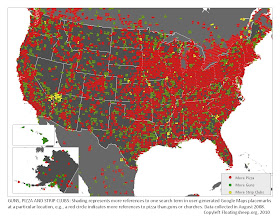 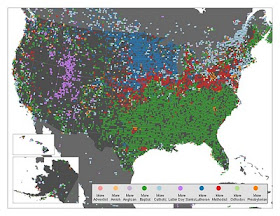 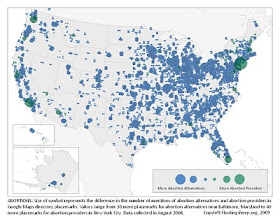 #5 What do Churches, bowling, firearms
and strip clubs have in common? 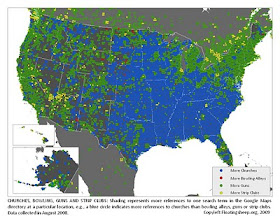 With this posting, this blog has reached a milestone: 100 posts. Since January, we’ve had over a quarter of a million visitors and close to 600,000 page views. Not bad for a sheep, airborne or otherwise.

Now that we’ve reached some measure of success, we of course need to start tinkering with it.

In truth, Taylor needs to finish his thesis, Matt’s sabbatical is sadly coming to an end and Mark is in Kenya (although rumor has it he’s coming back). As a result, we will be posting more irregularly than the 2-3 times a week that had been our goal for much of the year.

They say that all good things must come to an end, but (1) we’re not certainly not ending, and (2) we're not sure if “good” is the right word for the Floatingsheep blog. We prefer fun, brilliant, nerds, brilliant (again), provocative, hero, great, brilliant (3 times now) and plucky.

p.s. And of course we’d like to take the time to flog some of our silly highly collectible merchandise
Matthew Zook at 13:51 2 comments:
Share

Now that we've mapped both the areas that prefer drinking over eating and which parts of the world prefer which types of alcohol, it seemed apropos to introduce our fascination with language into the cybergeography of alcohol. 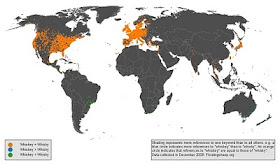 Sadly enough, we are unable to come to come to a definitive answer on which the world prefers. As the amber haze which covers the above map indicates, most of the world seems to have a fuzzy grasp of how to spell the term, with references to each spelling being equal across most of the world [2]. Perhaps they are just too intoxicated to care which way it is spelled?

Interestingly, the few places where references to one or another spelling predominate are not located in the actual places associated with those spellings. Instead, references to "whisky" are most prevalent in South America, while an interesting mixture of the two spellings can be seen in Australia, New Zealand and South Africa. Even Ireland and Scotland seem to be a bit mearbhall about which is spelling is correct.

[1] For what it's worth, Willie Nelson spells it with the "e", but Whisky a Go Go leaves the "e" out.
[2] Places where references to both spellings equal zero were excluded.
Taylor Shelton at 11:00 2 comments:
Share

Although it has been several months now, the most popular finding of the Floatingsheep Collective has continued to be our discovery of the Beer Belly of America. So now we all know that the upper Midwest of the United States likes to drink, but what else can we learn about the cyberscapes of alcohol production and consumption around the world?

Using the tried-and-true Floatingsheep method of comparing references to various keywords within the Google Maps database, we've mapped references to six different alcoholic keywords. Although the keywords range from the broadest categories of alcohol (e.g., beer and wine) to particular types of of alcohol (e.g., bourbon, vodka and whiskey) and all the way to the brand name (e.g., Guinness), they give a rough approximation of who is drinking what and where. 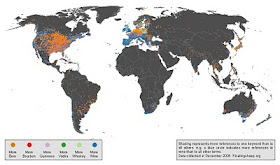 Seeing that most of the world is divided over their preferences of beer and wine is not necessarily surprising (although this could be owed to the absence of a generic term like "liquor"). Neither are many of the particular concentrations of references surprising: wine dominates on the east and west coasts of the United States, as well as in Spain, France and Italy, while references to beer outnumber all others in the midwestern US and Germany. The lack of references to beer in England and Ireland is, however, a bit worrisome. 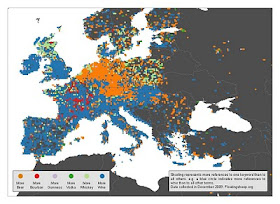 Although references to Guinness and vodka are hardly visible, noticeable clusters of whiskey drinking are evident in both Scotland and Poland, as well as parts of Sweden. References to bourbon are most evident in Floatingsheep's North American headquarters of Kentucky, where 95% of the world's bourbon is supposedly produced in one form or fashion. 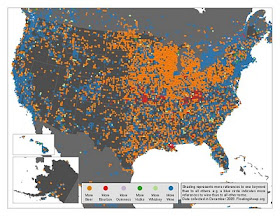 References to "bourbon" in France and New Orleans, Louisiana are, of course, not related directly to the beverage. Instead, they likely refer to the House of Bourbon which unfortunately was not a bar, and Bourbon Street, which does indeed possess quite a few of the things. Likewise, the clustering of red in Kansas indicates the Bourbon County of that state, which is a poor impostor of Bourbon County, Kentucky, for which the beverage is named. Hilariously enough, Bourbon County, Kansas remained a dry county until 1992. A poor impostor, indeed.
Taylor Shelton at 19:25 1 comment:
Share

Jedi Knights as a Religious Phenomenon

As a non-religious person, I'm not sure how I feel about the fictional protagonists of my all-time favorite movies being turned into a quasi-religious sect. But that's exactly what's happened with the Jedi Knights of Star Wars. From the worldwide movement in 2001 to list Jedi as one's religious preference to the current debate over the axing of Canada's long-form census, the Jedi have long permeated the boundary between reality and fantasy. With their locations visible in Google Maps, we now have evidence that have they also permeated the boundary between materiality and virtuality [1]. 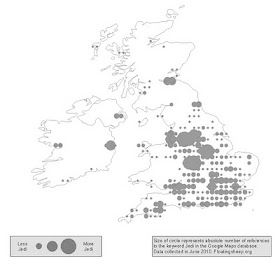 This map comes from a paper we're currently working on about the cyberscapes of religion in Google Maps. Using the absolute number of references to "Jedi" in the Google Maps database as our measurement, we thought that mapping these references in the UK would present an excellent opportunity to blur the boundaries between the sacred and the farcical.

Although the concentration of most geotagged content can be explained by population density, references to Jedi conform to a more unique spatial distribution. The greatest number of references to Jedi exist in and around the cities of Manchester, Nottingham and Birmingham - all fairly large in their own right - rather than in the capital and largest city of London. It's also interesting to note that most of England has some level of references to Jedi, perhaps indicating a general level of interest across the country.

So what makes them so prevalent by our measure? Are these the locations of new, secret Jedi academies? Is there an important force nexus present somewhere in one of these cities? Any clues or suggestions welcome...

[1] We currently have no evidence that this virtual representation of Jedi within Google Maps has anything to do with the mystical powers of the Force.
Taylor Shelton at 11:00 No comments:
Share

Fast Food Fights: The Colonel and the Clown

One would be hard pressed to find two faces more associated with fast food than those of the colonel and the clown. The ubiquity of McDonald's and Kentucky Fried Chicken are what makes America great. Or at least great of girth. But, more importantly, how do the geographies of the competing food chains differ? 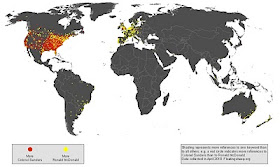 When comparing Google Maps references to the iconic faces of these two fast food franchises, some very interesting spatial patterns emerge. For the most part, Colonel Sanders is a more prominent presence throughout the American landscape than Ronald McDonald. And while references to each are somewhat sparse throughout the rest of the world, these places are almost uniformly more favorable to Ronald McDonald.

Apparently the world prefers diplomacy (clownish or otherwise) over military expansionism. Who knew?

Building on this, we wondered who might win the virtual competition between these fast food icons and the animals associated with their staple menu items.
Colonel Sanders vs. Chicken 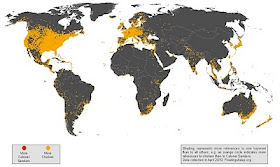 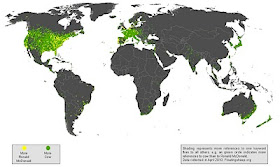 From the first map, it would appear that the chickens of the world (no doubt inspired by our call to arms for the pigs) have begun waging a full on counter attack on the Colonel - even extending the battle to his relatively safe territory within the U.S. In fact, Colonel Sanders is so overwhelmed by the number of Google Maps references to chicken that it appears he's in some kind of virtual hiding place.

Ronald McDonald is, however, faring much better against the cows of the world. Although the bovine predominance is noticeable, the man with the painted face is showing that it doesn't take military commendations (or a fancy certificate from the Governor of Kentucky) to win the virtual battle, just really big shoes.