The Prime Minister and the Pig: Mapping #piggate

It has recently been revealed that David Cameron, the Prime Minister of the United Kingdom, has potentially engaged in sexual acts with the head of a pig. Yes, really [1]. We assume the technical term would be beastialnecrophiliality. Or Necrophilibeastialogy. Or Ick!

Because of our deep commitments to both data science and animal welfare here at Floatingsheep, we decided that we needed a better understanding of how the conversation around #piggate is spreading geographically. Also, how we can resist such a wonderful story about a "debauched and secretive society" at one of the home institutions of FloatingSheep. Hint: it is NOT the University of Kentucky. 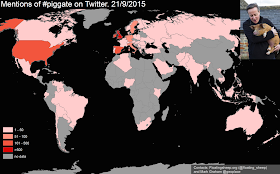 In the map above, you can see that people in the UK - for obvious reasons - are most likely to be tweeting about the Prime Minister and his, erm, attachment to pigs [2].

The French, interestingly, seem to be largely ignoring the story. Whereas the Spanish, Irish, and Americans all seem to be highly tuned-in (perhaps because of the love of bacon and ham in all three countries).

The spatial dynamics of #piggate will, of course, evolve over the next few hours and days; but until then, this is perhaps the obvious next addition to any conversation that begins with 'where were you during #piggate 2015.' What a time to be alive!

Unless of course you happen to be the severed head of porcine.

--------
[1] Yes, that is actually the accusation. We're still have trouble processing the news as well.
[2] Perhaps rapprochement is better term. After all it's a French word and makes it sound somehow better. And frankly this needs all the help it can get.
Mark Graham at 10:39
Share