Data Shadows of an Underground Economy

Following on from our "Price of Weed" maps featured in the September issue of Wired, we would like to make available the draft report that the maps came from. The full title of the paper is "Data Shadows of an Underground Economy: Volunteered Geographic Information and the Economic Geographies of Marijuana."

Please note that we are still working on the paper (so excuse any lack of polish), but would certainly appreciate any comments and critiques on the draft before we submit it for peer-review. 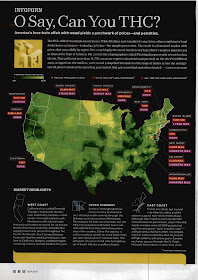 The Price of Weed

We’re very happy to report that a new FloatingSheep map is featured in the September issue of WIRED magazine under the title of "Infoporn: O Say, Can You THC?" [1]. Our map shows the differences in the retail price of marijuana based on user generated reports from the PriceofWeed website. According to WIRED, it offers "a look at the sprawling gray market that gets some high and others heated." 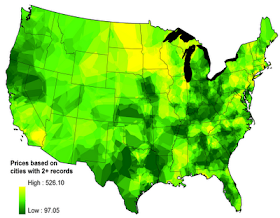 The map featured in WIRED is taken from a much more detailed research paper focused on the potential for user-generated data to shed light on underground economies such as marijuana use. The map relies upon thousands of user reports on marijuana purchases referenced to city locations from the Priceofweed website (see our earlier posting). After cleaning the data to get rid of the outliers, we created a continuous surface using a statistical interpolation technique known as kriging to identify the average variance among price differences through a spherical semivariogram model. To obtain a price for each location show in the map above, an interpolated value was estimated as a weighted average of prices from its twelve neighboring points.

One of the issues in generating these maps is how many observations we would require at each point (or city) before including it in interpolation. Increasing the number of observations (e.g., n > 10) helps control error in the average price at each point but limits the number of points. Lowering the sample size requirement (e.g., > 2) results in more points upon which to base the interpolation but increases price variance. In order to visualize these differences compare the map above (n > 2) with the map below (n > 10). While the first map shows a finer resolution of price variation (albeit with a decrease in the accuracy of the pricing data) it is consistent with the patterns resulting from the rougher resolution in the second map. 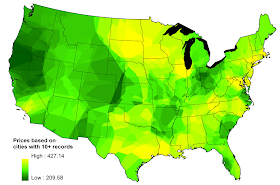 We’re in the process of finalizing a paper analyzing this data including a state and city-level multivariate analysis of price. Key explanatory variables in the models include the legality of medical marijuana, level of production and an intriguing distance decay effect as one moves away from Northern California. You can download the draft paper at this link. As always we welcome questions and critiques.

August is the season for summer vacations and things are no different here at Floating Sheep. The collective has been taking it easy this month but we're gearing up for the Fall mapping season. This includes some detailed analysis and maps of crowd sourced data on the geography of the underground economy of marijuana. Stay tuned!

Until then we thought it worthwhile to revisit our analysis of the Geography of Vacation which we first posted back in February 2010.

Over the past few months, we've published a number of maps showing the automatically- and user-generated online representations of place, from the seedy to the holy to the hoppy. Perhaps you've found yourself thinking, "I'd sure like to go there!", wherever there may be. So where exactly is it that people want to go?

The following maps show the incongruities between these automatically- and user-generated representations of place when searching for "tourism" and "vacation" in Google Maps. The values in each of the four maps were normalized using the national average for each search term, with any points not 20% greater than the average (indexed value >1.2) being excluded. These maps thus specifically show the places in which there is a higher-than-average concentration of placemarks (either user-generated or directory) mentioning the words "tourism" or "vacation". 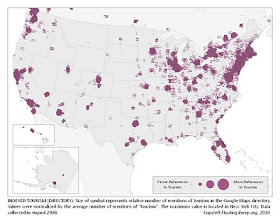 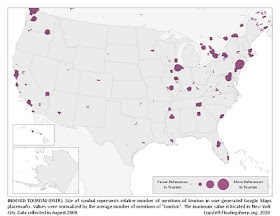 Perhaps the starkest contrast between these maps of tourism is the much smaller number of user-generated placemarks as compared to the automatically-generated directory placemarks, usually drawn from pre-existing sources like the Yellow Pages. In moving from directory to user-generated representations, almost all rural locations disappear from the map, although the vast areas west of the Mississippi River with no information at all show that even some urban areas don't possess larger-than-average amounts of tourism-related information. 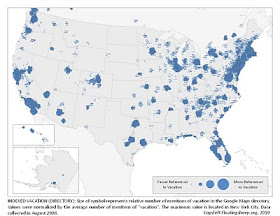 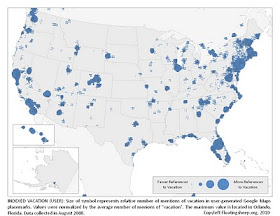 Shifting our attention to searches for "vacation", it is interesting that in this case, user-generated representations still have considerable coverage across the United States. Moreover user generated references to vacation differ from the "official" map of vacation based on Google Maps directory listings.[1] That is, "vacation" shows up most often in New York City in the Google Maps directory but user-generated representations show that Orlando, Florida, the home of Disney World, is the place to go on your coveted break each year.

God help us all.

Take note as well, that coastal areas all across the United States are prominent in the peer produced constructions of vacation, from the coastal Carolinas and Georgia to the Gulf Coast, and even throughout California, Oregon and Washington. So perhaps there is hope of eluding our mouse overlords after all.

Most importantly, these maps call our attention to the significant variances in how place is perceived online, depending on what measures are being used to represent these constructions. Even if it's possible to dig a hole through the planet on Google Earth, the difference between, and within, places remains as important as ever.

[1] This is also one of the few cases in which the maximum value in a map deviates from one of the nation's largest urban areas.
Matthew Zook at 17:09 No comments:
Share 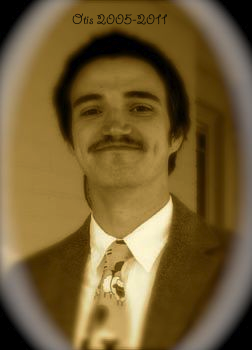 The Floating Sheep Collective wishes a fond bon voyage as one of our own moves on to the next stage of his career... studying for a Ph.D. at Clark University. We hear that this is an up and coming program with one or two promising faculty members... ;-)

We take solace in the fact that there is this nifty new technology called the "intertubes" that allows people to exchange information across great distance [1]. It sounds very intriguing and we looked forward to powering up our 1200 baud modem so we can try it out. We expect this will ensure that Taylor's cutting and pithy commentary will continue to grace these pages.

So even as Taylor's physical residence shifts, Floating Sheep will remain his digital hangout...his virtual pasture in the tubes.

[1] We also take solace in the fact that we have such a jazzy picture of him to share with the world. Please note the tie...available for purchase at our gift shop.

The following is pulled from the cutting room floor of our upcoming chapter in the edited collection Zombies in the Academy: Living Death in Higher Education.

After seven parts of this series, we remain somewhat surprised about the sheer amount of things we had to say about zombies. After all, zombies themselves are remarkably reticent when it comes to revealing their inner thoughts. Then again, how much is there to say about "braaaaiiiinnnnnsssssss"? In any case, given the strict word length for our chapter we found that plenty of material ended up on the cutting room floor. Since we were all raised to be thrifty, we're recycling it here. 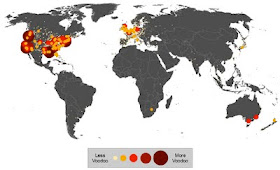 In the first map above, it is rather hard to see any clear patterns of references to "voodoo" at the global scale that cannot be seen in the U.S. map as well. On the other hand, the second map of the U.S. does show some intriguing clusters. First is the clear preference towards voodoo in Louisiana and much of the gulf coast, almost certainly reflecting the historical and cultural practice of the voodoo religion in the region. Harder to explain are the clusters around Dallas and Atlanta which, to our knowledge, don't have the same cultural traditions.

Zombies and Voodoo in the United States 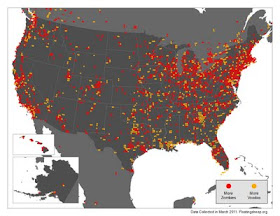 Of course, the fact that the Northeast from DC to Boston is nothing but a seething pit of zombies comes as little surprise.

Be sure to check out the previous iterations of our Preparing for the Zombie Apocalypse series in Parts I, II, III, IV, V, VI and VII.
Taylor Shelton at 10:00 No comments:
Share
‹
›
Home
View web version