Baptists, bibliophiles, and bibles, Oh My!

Two powerful and often opposing forces within society are faith and reason. Regardless of the extent to which a cultural war exists, the balance between the two (e.g., teaching evolution in the schools, etc.) is a prominent feature of popular socio-political discourse in the United States. Thus, the topics makes a perfect subject of a map and leads us to ask which parts of the country prefer bookstores to bibles? What's the ratio of Baptists to bibliophiles? 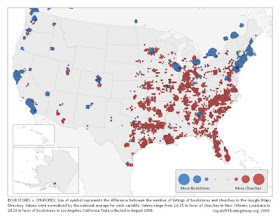 For the most part, the relative prevalence of bookstores occurs in and around the big cities - Los Angeles, California is the site of the highest indexed value, and is joined by the megalopolis of the eastern seaboard as having the highest concentrations in favor of bookstores. Even cities such as Atlanta, nestled in the Bible Belt of the American southeast, tend towards a relatively large number of bookstores. On the converse, other large cities like Dallas, San Antonio and Houston continue to favor churches, with New Orleans (the largest city in Louisiana) having the highest relative concentration of churches in the nation. Suburban areas surrounding large population centers also show a near-universal favoritism for churches.

So while there appears to be no single variable determining the local trends toward faith or reason, it is evident that even some of the most common assumptions regarding the geographies of faith and reason have proven to be more complicated; not all large cities are necessarily bookish, but neither is the bible belt a homogeneous geographic unit.

[1] Google Maps directories are drawn from a range of sources such as yellow page listings. This category is distinct from and excludes user generated placemarks that we use in other maps.
Taylor Shelton at 05:00 16 comments:
Share

The following maps are the first of a series that will be made in order to map out the distinct geographies of Wikipedia. Many Wikipedia articles (about half a million) are either about a place or an event that occurred within a place, and most of these geographic articles handily contain a set of coordinates that can be imported into mapping software.
The map below displays the total number of Wikipedia articles tagged to each country. The country with the most articles is the United States (almost 90,000 articles), while most small island nations and city states have less than 100 articles. However, it is not just microstates that are characterised by extremely low levels of wiki representation. Almost all of Africa is poorly represented in Wikipedia. Remarkably there are more Wikipedia articles written about Antarctica than all but one of the fifty-three countries in Africa (or perhaps even more amazingly, there are more Wikipedia articles written about the fictional places of Middle Earth and Discworld than about many countries in Africa, the Americas and Asia). 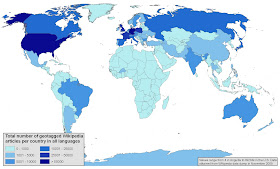 When examining the data normalised by area, an entirely different pattern is evident. Central and Western Europe, Japan and Israel have the most articles per square kilometre, while large countries like Russia and Canada have low ratios of Wikipedia articles per area. 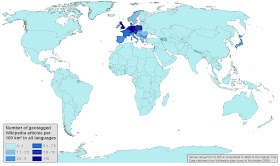 Finally, the data were also mapped out against population. Here countries with small populations and large landmasses rise to the top of the rankings. Canada, Australia and Greenland all have extremely high levels of articles per every 100,000 people. Smaller nations with many noteworthy features or geotaggable events also appear high in the rankings (e.g. Pitcairn or Iceland). 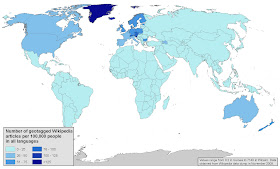 Presences and absences play a fundamental role in shaping how we interpret and interact with the world. The fact that the geographies of Wikipedia content are so uneven therefore leads to worrying conclusions. As we increasingly rely on peer produced information, large parts of the world remain a digital 'terra incognita' (in a similar manner to the ways in which many of those same places were represented on European maps before the 19th Century).

More maps examining the distribution of content in specific languages, and looking in more detail at specific regions will be uploaded soon.
Mark Graham at 03:37 9 comments:
Share

Abortion is a hotly contested political issue in the United States, as it has been since even before the Supreme Court's decision in Roe v. Wade in 1973. Regardless of one's position on the matter, the ongoing debate often lends itself to hyperbole, obscuring the observable facts. 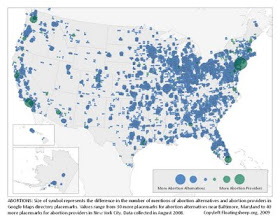 Overall, the blue coverage across the United States shows that, in a vast majority of the country, abortion alternatives are much easier to find than abortion providers. So while the "pro-life" camp ended up on the wrong side of the 1973 Supreme Court ruling legalizing abortion, they have built a significant organizational infrastructure which can be leveraged to promote their cause, while "pro-choice" advocates remain concentrated primarily in the nation's more politically progressive urban centers.
Taylor Shelton at 11:13 11 comments:
Share

Where in the world is Barack Obama? (and John McCain, too!)

To follow up on our previous map showing the difference in the number of mentions between Barack Obama and John McCain in user-generated Google Maps content prior to the 2008 US Presidential Election, we figured an alternative visualization might be beneficial. The following maps represent the absolute number of mentions of Obama and McCain, respectively, in user-generated placemarks, a disaggregation of the map in our previous post. 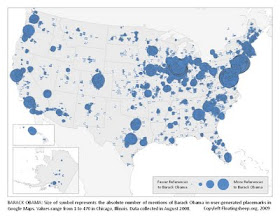 This map, much like the previous iteration, shows the vast concentration of user-generated placemarks mentioning Obama in the nation's urban centers. The nation's largest cities - New York City, Los Angeles and Chicago - all appear prominently in this map. Although many of the notable points in both the Obama and McCain maps can be attributed to the large populations (and thus, presumably, a greater level of connectedness), a number of other explanations remain necessary. Despite being the 3rd largest city in the United States, Chicago is also the home of Barack Obama, and it houses the highest concentration of placemarks that mention his name. Significant events also seem assert their presence spatially, as Denver, Colorado, the site of the 2008 Democratic National Convention, is another relatively well-represented area, along with Portland, Oregon, where 70000+ rallied for Obama in May 2008. 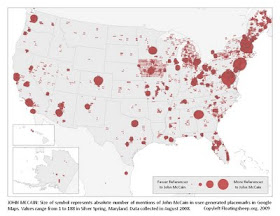 Mirroring the already established pattern of urban primacy, much of McCain's presence is concentrated in the nation's urban centers, again including both New York City and the Washington, DC metro area (where McCain has the highest concentration). Unlike Obama, the places McCain is best represented in Google Maps were not necessarily the places he fared the best during either the primary or general election. For example, both Iowa and Michigan, in which McCain receives a nearly uniform number of mentions across the state, voted against him in both the primary and general elections.

Despite some of these patterns of user-generated content merely confirming the primacy of urban areas in virtual representations of the material world, others depart significantly from the predicted spatial clustering. Some areas that voted for McCain feature more prominently in the user-generated representations for Barack Obama, and vice versa, with the number of mentions for Barack Obama being more than double the number of mentions for John McCain. Although not all of the patterns displayed can be easily attributed to a particular causal factor, they only further complicate the relational geographies of the virtual and material world.
Taylor Shelton at 17:24 No comments:
Share
‹
›
Home
View web version