Later tonight, the beloved Wildcats of the University of Kentucky men’s basketball team face the University of Wisconsin Badgers in the Final Four. And while the score will ultimately be settled on the court, this (sort of) rivalry can’t help but spread to other arenas. You’ve got the greatest tradition of cheese-making and beer brewing in the United States up against the greatest tradition of burning couches, making (and drinking!) bourbon and betting on horses. You’ve got those former Wisconsin-ites of Maptime Boston starting stuff with the good hearted Kentucky folks at MaptimeLEX. You’ve got new maps versus old maps.

Indeed, the map itself offers an important terrain on which to fight the battle between Kentucky and Wisconsin. The unsourced map below represents just the first cartographic shot fired in this war. While Wisconsinites might like to think that only their Minnesotan rivals to the west are the only ones that would side with Kentucky in this match-up, how are we to believe such cartographic assertions without interrogating the context of the map? 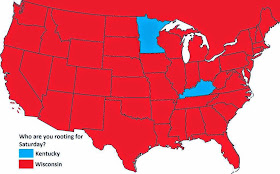 From what dataset is this map constructed? Why is this data aggregated to the state level, anyways? Why isn’t Canada similarly disaggregated into province-level data? Are we really to assume that such administrative regions are internally coherent in terms of their sports-rooting interests? I mean, UK even has a half-Canadian player! Even if we are assuming that, why are we assuming that Mexico doesn’t like college basketball, too? Similarly, why are there no gradations to reflect those places that might be relatively conflicted about who they’re rooting for? Why is there no context regarding the motivations behind such rooting interests (e.g., Michigan State and Duke fans who would much rather play Wisconsin than Kentucky in the championship game)?

Quite obviously, we can’t trust this map. Maps are fallible and power-laden and subject to the whims of the always-partial cartographer, in this case some Wisconsin fan who needed to make themselves feel good before a second-straight Final Four defeat at the hands of the greatest program in the history of college basketball. What we can trust, however, is that always transparent window into the collective social psyche of 21st century America: our database of geotagged tweets. This kind of data is objective and apolitical, a true representation of the world as it actually is. So, collecting nearly a month’s worth of tweets in the continental US from March 1 thru March 30 for the more-or-less official school hashtags of #BBN and #OnWisconsin, we sought to create a more objective, data-driven representation of the geography of Saturday’s matchup, as seen below. 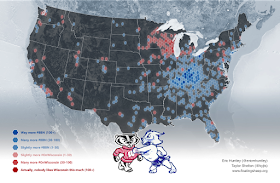 At the broadest level, #BBN tweets outnumber #OnWisconsin tweets by over 5x: 5,707 to 1,039. For a state that’s only about three-quarters as populated and a university that has only about two-thirds as many students, I’d say that’s a resounding victory for the Big Blue Nation. While each team dominates its own state (though we should note, there are some parts of Wisconsin without any pro-Wisconsin tweets at all!), those areas with more #BBN tweets than #OnWisconsin tweets are a bit more numerous throughout the country. Importantly, Kentucky fans have taken over key outposts such as Chicago and New York City, along with Nashville (the site of this year’s Southeastern Conference tournament), Cleveland (the site of the Midwest Regional) and Indianapolis, the site of the Final Four itself, not to mention much of the south, more generally. These are important strategic victories in the geography of basketball fandom this week, as the only other state Wisconsin fans have dominated apart from their own is Minnesota, in clear contrast to the stylized representation seen up above. Indeed, it’s quite telling that based on our hexagonal aggregation, no place in the United States has more than 100 more #OnWisconsin tweets than #BBN tweets: not even Madison, Wisconsin!

While there are still a number of places throughout the country where Wildcats and Badgers seem to be coexisting peacefully (thus far, at least!) -- and a good number more that seem not to particularly care -- we can say with some level of certainty that the members of the BBN are crazy and the Cats won’t be stopped on their way to another national championship. At least those folks in Madison are good at making maps! [2]

-----------
[1] Many thanks go out to Eric Huntley, PhD student in the Department of Geography at the University of Kentucky, for his help with this map!
[2] No hard feelings, Wisconsin fans. We love y'all. But seriously, GO CAYTS! And may we have another occasion to publish an academic paper about UK fans celebrating a national championship!
Taylor Shelton at 10:00 No comments:
Share

Mark and his colleague Stefano have put together a short paper that will be forthcoming in Environment and Planning A. The paper focuses on the geography of geographic information, and builds on Mark's work into the uneven geographies of information. It highlights how the very information systems that we use as 'ground-truth' are themselves characterised by significant biases.

Gazetteers are dictionaries of geographic placenames that have important implications far beyond the worlds of geographers and cartographers. By containing ‘definitive’ lists of places, gazetteers have the ontological power to define what will and won’t be geocoded and represented in databases, maps, search engines, and ultimately our spatial understandings of place.

The paper focuses attention on GeoNames, which is the world’s largest freely available and widely used gazetteer. It illustrates how content in GeoNames is characterised by highly uneven spatial distributions. There are dense clusters of placenames in some parts of the world and a relative absence of geographic content in others. These patterns are related to not just the wealth and population-size of a country, but also its policies on internet access and open data. The paper then traces some of the specific implications of this information inequality: showing how biases in gazetteers are propagated in a variety of geographic meaning-making.