The past weeks have been quite eventful in Scotland as a monumental election unfolds. Everyone wants to know, which way will the Scots vote? While we here at Floatingsheep certainly don't have the answer or power to predict the referendum, we thought it might be interesting to see the geographic dimension of how Scots (and the rest of the world) are tweeting about a fundamentally geographic decision [1].


We started by comparing the prevalence of 'no' (i.e., pro-union) hashtags versus 'yes' (i.e., pro-independence) hashtags the global level. In the map below, orange indicates a greater prevalence of 'yes' tweets and purple indicates that there are more 'no' tweets. Perhaps the most interesting thing here is that we can see the United Kingdom swing towards a 'yes' vote, which has, for the most part, appeared to be the underdog in more conventional polling leading up to the referendum. Then again, most of Western Europe, along with Thailand and Australia, also have a general preference for 'yes' tweets. Oddly enough, the United States is the staunchest defender of the union, based solely on it's massive preference for 'no' tweets. Strange for a country that yearly celebrates its breaking away from Mother England


Comparing 'Yes' vs. 'No' Tweets at the Global Scale

Looking closer at the UK, we can see that much of Scotland has a roughly equal number of tweets in support of both the 'yes' and 'no' positions -- reflecting the contentious and hotly-contested nature of this referendum. But the Central Belt in particular -- where a lot of actual votes will be coming from, as it is the most densely populated part of the nation -- swings heavily towards 'yes'. The English, on the other hand, seem very much inclined towards pro-union or anti-separation tweeting.


Comparing 'Yes' vs. 'No' Tweets in the United Kingdom 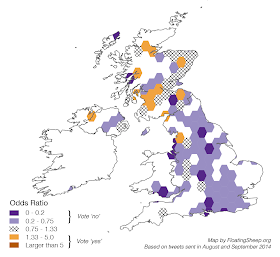 To take an alternative look at support for the different positions, we mapped the percentage of each of the three hashtags that originates in each of the administrative sub-regions of both Scotland and the UK as a whole. The Highlands and parts of the Central Belt again show up as strong bastions of 'yes' votes. 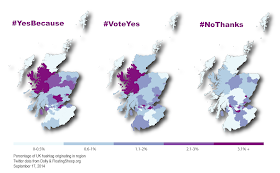 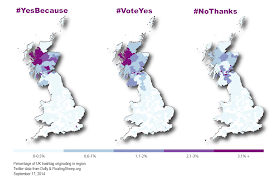 But seeing as we're interested in doing more than just mapping distributions, the next question is how are we to put all of this into context? The only proper place to start is, of course, with the Queen. The map below illustrates those places which also tend to have higher-than-normal levels of tweeting about the Queen (in orange) and those places that are tweeting less about the Queen than might usually be expected (in purple), based on a baseline measure of tweeting activity. Sadly, the whole country seems to be ignoring her. Apart from Glasgow, that is. In the interests of not upsetting an 88 year-old lady, we have chosen not to explore these tweets in any more detail. 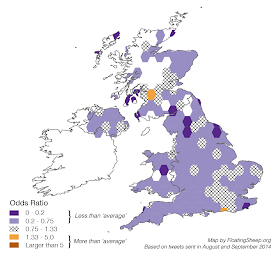 Building on this, we also explored the geography of references (using the same method described above) to something inherent in most people's definitions of Britishness: tea and crumpets

We see an all-around tea-depression; hardly anywhere is particularly pro-tea at the moment, truly a shocking state of affairs. The British are clearly not being their usual selves, and for their sake we're glad the referendum will be over soon, regardless of the outcome. Scotland, in particular, has average tea counts that are low by historical standards. 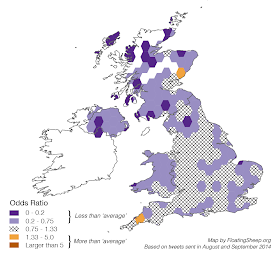 This analysis would, of course, all be meaningless unless we mapped the geographies of a range of uniquely Scottish phenomena: haggis [3], kilts and Nessie. Still using the same method as above, the map below shows without a shadow of a doubt that Scotland is destined to become its own nation. 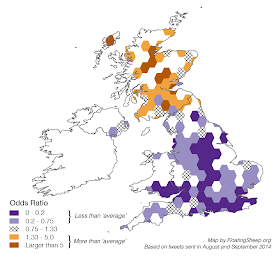 The Scots are tweeting about these topics at a greater-than-usual rate, while their southern neighbors remain distinctly uninterested. If ever there were an indication that these nations are divided by more than just a line on a map, we see that manifested in the topic of people's Twitter conversations. In short, the Scottish referendum is not just simply about "yes" or "no" but seemingly touches on much more fundamental questions of ovis-based cuisine, men's wear and mythological creatures.

So even if the 'no' votes win out in and the Kingdom remains united, the geographies of haggis related tweeting (along with a few other things) has revealed that these are two very different nations, indeed.

UPDATE (9/18/14 @ 12:45pm):
We've added another map to our analysis below, which shows the relative prevalence of #VoteYes and #NoThanks tweets throughout Great Britain, at the level of administrative sub-regions, rather than the hexagons used above. This map makes for a stark contrast between the English (and Welsh) and the Scottish... while there are a few areas of Scotland that show relative parity between 'yes' and 'no' tweets, most of the nation demonstrates a relatively strong prevalence for 'yes', while much of England demonstrates at least a slight preference for 'no'. 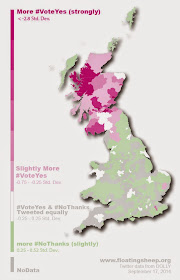 --------------
[1] In case you don't know what Twitter, is we refer you to the Scots Wikipedia page on the subject, which states: "Twitter is an online social networkin service an microbloggin service that enables its uisers tae send an read text-based messages o up tae 140 characters, kent as 'tweets'".
[2] Perhaps we could have simplified this phrasing, but then we would have lost the chance to type "anti-pro-independence", which is a lot of fun. Anti-pro-independence. Anti-pro-independence.
[3] Normally the Floatingsheep collective avoids conversation about sheep heart, liver, and lungs that are boiled in a sheep stomach. But we made an exception this time.
Matthew Zook at 18:18 1 comment:
Share

From snarky exchanges between official Canadian and Russian Twitter accounts, conflicting representations of Crimea in Google Maps and OpenStreetMap, and a recent piece by Peter Pomerantsev in The Atlantic on how Vladimir Putin is revolutionizing information warfare, the ongoing conflict in the Ukraine has been widely reflected online. One particular manifestation of this conflict on social media was the #RussiaInvadedUkraine hashtag, which emerged at the end of August as Russian troops appeared in Eastern Ukraine. The hashtag has served as a social media rallying point for supporters of Ukraine, with the New York Times reporting that in the first day of its existence, over 500,000 tweets using the hashtag were sent.

Wondering what the spatial distribution of this hashtag looked like across Europe, we fired up DOLLY and collected all geotagged tweets containing the hashtag sent from European countries between August 27th and September 7th, 2014, resulting in approximately 4,500 tweets. To control the effect of single, very active, individuals sending many tweets -- and to better represent aggregate rather than individual actions -- we only included the first five tweets from any single user, resulting in a total of about 2,100 geotagged tweets. These tweets were aggregated to the country level and then normalized by the total number of tweets sent during this same time period, resulting in a location quotient for each country. The location quotient indicates the relative prevalence of tweets containing the #RussiaInvadedUkraine hashtag compared to the overall level of Twitter activity during this same time. Values greater than one indicate that people in a given country contributed a greater number of tweets about this topic than would be expected based on usual tweeting levels, with values less than one meaning that they were underrepresented in tweets using this hashtag than one might usually expect. 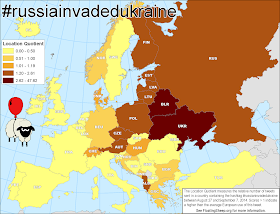 The map above illustrates a strong concentration of the #RussiaInvadedUkraine hashtag in countries that are nearer to the Russian border. In short, a classic example of a distance decay function, in which distance from a phenomenon is inversely related to attention or presence of a given phenomenon. In general, most countries within Eastern Europe -- including Russia itself -- show a higher level of Twitter activity around this hashtag, with some exceptions such as Moldova, Slovakia and Romania. In particular, however, the Ukraine and its neighbor Belarus show an extremely high level of activity around this issue, with the Ukraine alone contributing roughly 48x more of the tweets using this hashtag than it did to the baseline sample used for normalization. Conversely, as one moves westward, the level of participation in this social media meme drops considerably. While Germany, which is both geographically and relationally more proximate to Eastern Europe has a location quotient of just 0.81, the Netherlands and Italy have scores of 0.25 and 0.22, with the UK and France having extremely low location quotient values of just 0.05. 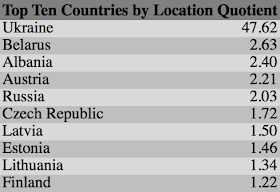 Of course, Twitter is not an unproblematic representation of the population, and tweets containing this hashtag can express a range of sentiments from both sides of the conflict [1]. Quite clearly, the interest and official response from western states (and their militaries) is not tied to the level of popular participation in social media activism. Instead, as we showed in the case of tweeting related to Ferguson, Missouri and the protests around the shooting death of an unarmed black teenager at the hands of a police officer, geography matters when it comes to directing our attention to news and current events, with people more directly connected to these issues having a much greater level of interest and concern [2]... even when it involves the invasion of military forces from one country into their neighbor.

-------
[1] Although a quick review of the text reveals that these tweets are primarily critical of Russia's actions.
[2] Of course, this shouldn't be particularly surprising. But for some people, it is.
Matthew Zook at 10:00 No comments:
Share
‹
›
Home
View web version