What percentage of edits to English-language Wikipedia articles are from local people?

As part of our on-going efforts to explore the geographies of participation in Wikipedia, we have calculated the percentage of local edits to articles about places. In other words, this map illustrates the percentage of edits about any country that come from people with strong associations to that country. 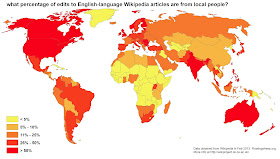 For more on the method that we employed, have a read through the post on "who edits Wikipedia" - in which the data collection efforts have been explained in much detail. The data are undoubtedly somewhat imprecise, but we are confident that they offer us the best overview of the geography of authorship that can be obtained with publicly-available data.

So what do these results tell us?

Unsurprisingly, they show that in predominantly English-speaking countries most edits tend to be local. That is, we see that most Wikipedia articles (85%) about the US tend to be written from America, and most articles about the UK are likewise written from the UK (78%). The Philippines (68%) and India (65%) score well in this regard, likely because of role that English plays as an official language in both countries. But why then do we see relatively low numbers is other countries that also have English as an official language, such as Nigeria (16%) or Kenya (9%)?

Then we also observe large parts of the world in which very few English-language descriptions about local places are created about local people. Almost all of Sub-Saharan Africa falls into this category. The key question is whether these data actually tell us anything meaningful. For instance, just because most edits about the United States likely come from the United States does not necessarily mean that those articles are representative, include a diversity of viewpoints, or fail to exclude people, places, and processes.

But the data nonetheless, in a very broad way, do tell a story about voice and representation. Some parts of the world are represented on one of the world's most-used websites predominantly by local people, while others are almost exclusively created by foreigners, something to bear in mind next time you read a Wikipedia article.
Mark Graham at 11:00 3 comments:
Share 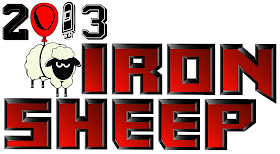 Inspired by the Iron Chef television series, we are holding our second annual IronSheep geo-hackathon.  This year we'll be in Los Angeles, California during the annual AAG conference.

Please click here to register.  Given space constraints of the venue, only folks who register will be able to participate.

The event seeks to mimic the format of the “Iron Chef” television series and challenges participants (grouped into teams with members from diverse backgrounds and skill sets) to produce meaningful analysis and fun, evocative map mash-ups from the same sets of user-generated, geo-coded data within a four hour time frame. The goal is to provide a semi-structured environment where participants can socialize and work in a fun yet socially meaningful project. Participants will be drawn from academic, industry and artistic communities from around the world.

We will provide food, beverages, data, internet, prizes and sparkling commentary. And perhaps even present one of the floating sheep collective as a sheep.  But don't count on that last point.

How to Win--suggestions from the first season of Iron Sheep

Location! The Importance of Geo-Data: Mark and Monica at SXSW

For any of our fans who might be in Austin this weekend for SXSW, be sure to check out the panel that Mark and Monica organized this Tuesday. You can check out more info about their panel (along with some visual evidence that they're having fun) below...

What: Location! The Importance of Geo-Data
Where: Sheraton Austin, Capitol ABCD
When: Tuesday, March 12, 11am-noon
Who: Mark and Monica will be joined by Catherine D'Ignazio of MIT and Devin Gaffney of the Oxford Internet Institute.


The proliferation of location-aware devices and geo-tagged data raises important questions: what will happen as more and more of the content we create online is automatically tagged with locational data? What can we learn from this profusion of geographic information? With this data we can find restaurants, friends and sex partners (a la Grindr.com), visualize inequalities in media attention, develop epidemiological models to predict the spread of diseases, find dissident safe houses in times of political upheaval and coordinate crisis response. But who is contributing data and who is not on the map? How are our social relationships being transformed? What about privacy? What about civic participation? Serious questions are mounting - this panel aims to raise several of them, and explore the transformative power this shift may bring. 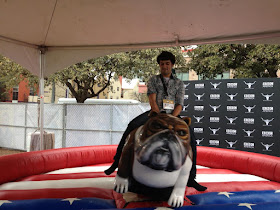