A special issue of the Journal of Urban Technology on information technologies and urban networks has just been published. It has a great series of articles from a range of researchers. Including the following two from the Floatingsheep collective.


Graham, M. and M. Zook. 2011. Visualizing the Global Cyberscape: Mapping User Generated Placemarks. Journal of Urban Technology 18(1): 115-132.
This article focuses on the representation of physical places on the Internet or what we term cyberscape. While there is a wide range of online place-related information available, this project uses the metric of the number of user-generated Google Maps placemarks containing specific keywords in locations worldwide. After setting out the methods behind this research, this article provides a cartographic analysis of these cyberscapes and examines how they inform us about the material world. Visibility and invisibility in material space are increasingly being defined by prominence, ranking, and presence on the Internet, and Google has positioned itself as a highly authoritative source of online spatial information. As such, any distinct spatial patterns within uploaded information have the potential to become real and reinforced as Google is relied upon as a mirror of the offline world.


Zook, M., Devriendt, L. and M. Dodge. (2011). Cyberspatial Proximity Metrics: Reconceptualizing Distance in the Global Urban System. Journal of Urban Technology 18(1): 93-114.
In this paper we analyze how distances between a sample of a hundred major world cities varies when measured in cyberspace. The project develops a novel spatial statistical model based upon the number of user-generated placemarks indexed by Google Maps. We demonstrate how this metric captures the “invisible” patterns of intercity information flows and helps comprehend the contours of the complex digital network that exists between large urban centers across the world. Using a specially designed software program to interrogate Google Maps, a series of keyword searches (“tourism,” “business,” “hotel”) as well as each of the city names were conducted in each of the sample places. Comparing this digital measure with the material movement of people and other relevant descriptive variables, such as national economic development and language differences, we were able to provide a cogent model that plausibly explains why certain city pairs (especially those that are physically distant) exhibit strong informational linkages. While the strength of these digital connections undoubtedly demonstrates the continued importance of physical proximity and established transport infrastructures in the twenty-first century, one can also observe significant evidence for [new?] digital “wormholes” which indicates that processes of globalization driven by online interaction also operates by its own rules.
Matthew Zook at 09:17 No comments:
Share

The map below appeared in a Delta Airlines in-flight magazine in April 2011 and serves as a good example of the ongoing rhetoric of ubiquity and uniformity of information availability and access.

This one category choropleth map (which for some reason bleeds outside the borders of the U.S.) claims to show the "seamless coverage of in flight Internet service". Interesting, this claim is immediately countered by the footnote which clarifies that "Coverage area is an approximation. True coverage may vary."

Truly, a very useful and informative map of the information age. 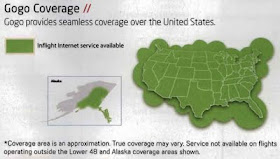 Geoweb Density in Israel and Palestine

With the ending of the Spring semester, the Floating Sheep collective is shifting gears for the summer as we attend conferences and engage in fieldwork. Monica is off to Florence, Italy and Paris, France, Mark is heading to Kenya, Matt has a trip to Seoul and Taylor will be going to Worcester, MA. Guess who drew the short straw? :-)

We're also working on completing a number of papers and projects which we'll be highlighting here. One project works on linguistic dimension of the geoweb and user generated content and involves a high resolution examination of differences in language uses specific places. One of our case studies is Israel and Palestine and will analyze the differences in availability of content in Hebrew, Arabic and English. 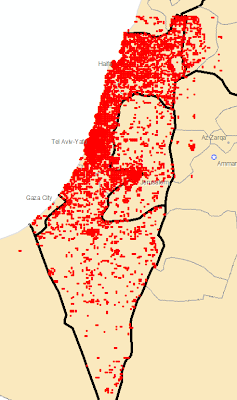 An initial look at the map is compelling. A preliminary version above shows the locations with at least one result, found using a fine grid of search locations within Google Maps. Note the much smaller number of hits within the West Bank, as compared to the neighboring regions of Israel. More to come as we work through this project...

Note: Our search was limited to the territories of Israel and Palestine as well as a border region surrounding them. This is why there are some grid points in Jordon, Egypt, Syria and Lebanon. But because the search did NOT include the entirety of these countries, interpret with care. This is a preliminary map.
Matthew Zook at 12:20 1 comment:
Share

The Density of GeoNames

Geonames is a crowdsourced database of geographical names for places. Essentially a crowd-sourced gazetteer which is available for free. A very cool resource. But what really attracted our attention was the map of the density of the features in their database. The dark spots in the map below show places that have very few place names. These are largely uninhabited areas.

BUT geonames also notes that "India (0.0114) and China (0.0113) have surprisingly few GeoNames features compared to their high population density."

Yet another example of the varying density of geo-tagged information on the Internet.

No ties or promotional swag this year but the FloatingSheep collective did manage to pose for a picture at the Seattle AAG meeting. From left to right, Mark, Taylor, Monica and Matt. 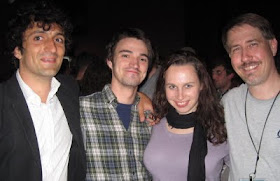 Google Map Maker in the U.S.

Google Maps has a tool called MapMaker which until recently was primarily used for countries for which there are not good maps. This obviously is problematic for Google if it wants to provide mapping services in these countries. The idea behind MapMaker is that users with on the ground experience or working from satellite imagery can trace roads, label towns, etc.

I highly recommend checking out Google MapMaker Pulse where you can watch in real-time (or close to real-time) as MapMaker edits are performed.

One of the results is that usable and digital maps are becoming available for many places for the first time. It is a great example of how user-generated data can be leveraged. It is also a great example of potential issues of power/control of maps, i.e., users are generating the edits but who "owns" the resulting map? MapMaker is NOT opensource like OpenStreetMap. It also highlights how a multi-billion dollar corporation can leverage free/donated labor to enhance a product they use to generate income. But of course, it makes the free Google Maps we use more useful. Clearly, tricky and complicated issues all around.

In any case, Google recently extended the MapMaker program into countries that already have good coverage, including the U.S. This means that users can add their own insights to Google Maps. There's a review process but it seems that edits are almost immediately entered into the system. 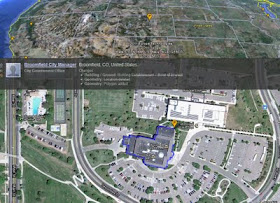 Edits to Broomfield, CO City Manager Office as seen in Google Maps
(note, that it indicates unverified edits but it was available with 15 minutes of the edit) 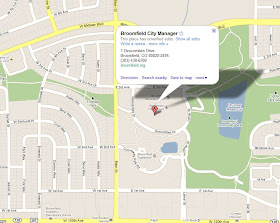 As I was preparing another posting about Google Maps MapMaker (coming in a few days) I noticed that there is a lot of user edits/activity around Abbottābad, Pakistan, the site that Osama bin Laden lived and was killed. There are two sites that have been "selected" as likely locations for the compound although it is not clear if either is the actual location. More generally the town of Abbottābad has received many tags and reviews via Google Maps in reaction. Click on some of the placemarks below to get a sense of these.

The embedded map below shows one of the locations (see here for a review of the other location) which is actively being tagged. Some of the tags are relatively terse and factual "SEAL TM 6 OBL Take-Down Site" while other postings are celebrating the event. And since it is the Internet, there is plenty of random flaming and spamming going on as well.

The current state of the site can be accessed below (be sure to click on "What's around here") to see all the tags which will likely be cleaned over time. Also a couple of screen captures of some tags that I saw. 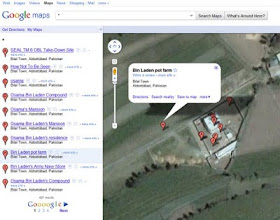 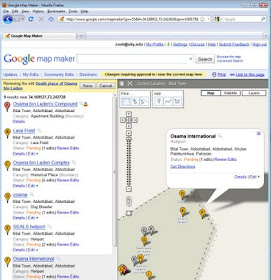