Last week the OkTrends blog posted 10 charts about sex which has a wide array of statistics and graphics (essentially chartporn). As we know that FloatingSheep readers are a sensitive lot who can take offense easily, we will be relying upon a series of euphemisms for the act that Shakespeare so elegantly referred to as the "beast with two backs." Our hope is to be informative whilst preserving the dignity of our blog and readers.

We were most, ahem, attracted to to the surprising relationship that the OkCupid data showed between a country's GDP and interest in casual sex, as per capita income rises so does the search for a quick "trot around the waffle"...at least according to OkCupid. 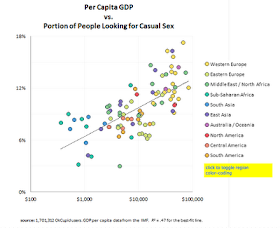 Because it is the biggest free dating site in the United States, OkCupid has a unique look at dating and the ways in which people represent themselves and seek others. Moreover they have been extremely open about sharing their insights and amazing and surprising trends in the world of online dating. We're particularly amused by the relationship between the cost of college tuition and the number of times per week students desire to "wax the spoondiddle."
But as we are FloatingSheep (also known as geographers) we couldn't help but wonder what a map of the data from the chart above would look like. In short, "a cartography of casual carnality." So we geo-visualized the percent of OkCupid.com users per country that indicated an interest in casual "parsley padding."

So what could be behind this desire to "get one's wheels oiled" outside the constraints of a committed relationship? Is it simply a matter of income as the OkTrends data suggest? We don't really know the answer but we are able to visualize the relationship between the size of a country's economy and the size of its desire to "take a spin through the juniper." So in lieu of an answer, we'll make another map.

One can see how the size of the U.S. economy causes to bulge like a ripe melon (much to Canada's shrinking horror) while on the other side of the globe, the "miracle economy" of South Korea doggedly pursues a Japan whose swollen landscape of GDP is layered with a high level of interest in casual games of "hiding near the turnip."

But is GDP really the best variable to consider in this case? After all, individuals looking for a casual game of "bottle the carburetor" on OkCupid are, by definition, wired to the Internet. So rather than using GDP it might be better to use the number of people with internet access to determine country size. After all, you know what they say about the size of a man's broadband... faster downloads.

The result is remarkably similar to using GDP which we expect. But since the above map combines both the number of people online and the level of interest in casual hookups, it seemingly, albeit spuriously (not that it has ever stopped us before), creates a directory for would be trollers where they are most likely to find others interested in casually "grinding their Irish wappers." Again, the relationship shown in the above is rather spurious. More people are going to be looking for a casual "thrunking" online in places where, well, there are more people online.

A better measure would be internet penetration (snicker), or the number of people on the internet divided by the total population. Using penetration (snort) to determine the size (giggle) of a country results in the map below. Which seems highly suggestive (at least for a map) of some kind of global group effort to "hop the last train to Cleveland."

Initially, we assumed this would correlate with our religion map, but as it turns out, Americans just aren't looking for a casual "hauling of someone's tomatoes" at the same rate as Europeans.

However, by this point we are so confused by the euphemisms and cartograms that we're in a bit of muddle. I think we'll just wonder off for a quick lie down. No euphemism intended.
Monica Stephens at 09:00 No comments:
Share

The Easter Bunny vs. the Fat Man

In our ongoing effort to map mythical holiday creatures, we decided to compare references to the Easter Bunny and Santa Claus. The bottom line: the bunny is a bust! Does this vast disparity in references to the mythical creatures associated with Christian holidays have something to say about which is most important? Is it just that people like the gifts that Santa brings them and are spiting the Easter Bunny for not dishing out the gifts? 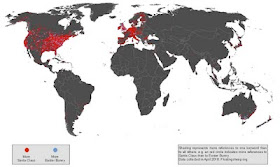 Still, it does seem that the Easter Bunny is giving Santa a run for his money in Britain with the coasts forming a thin out layer of rabbit territory with a Santa-filled center. Mmmmm...time to go pick up some Cadbury eggs.
Matthew Zook at 10:00 No comments:
Share

A good overview by Mark on some of the work coming out of FloatingSheep at what appears to be a local pub. Let it never be said that we're not interested in taking our research out of the Ivory Tower!

Guest Map: Surnames in the U.S.

Just a cool map from National Geographic on the distribution of surnames (a.k.a. last names) in the United States. It is interactive so zoom on in and see what last name predominates in your neck of the woods. 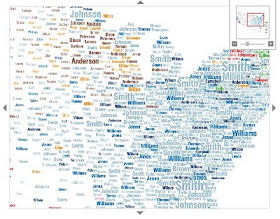 Here's a listing of Floating Sheep Sessions at the Seattle AAG, 2011. Don't miss the FloatingSheep party on Wednesday! 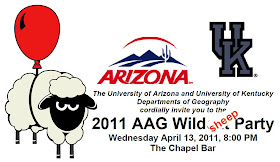 Matt and Mark will be at the VGI Pre-Conference at the Association of American Geographers Annual Meeting in Seattle on Monday. Taylor and Monica arrive on Tuesday and we'll be around all week. Sadly, no floatingsheep themed swag this year......

New GIS Faculty at the University of Kentucky

We are quite excited to be able to announce the news that the Department of Geography at the University of Kentucky (the North American headquarters of FloatingSheep) is welcoming two new faculty members (Dr. Jeremy Crampton and Dr. Matt Wilson) who do fantastic work in cartography, GIS and user generated geo-data.

Dr. Crampton's research has centered on understanding the role of GIS and maps as technologies of government in the production of identity (often race-based) and has developed several online GIS projects involving mapping of local communities in Atlanta.

Dr. Jeremy Crampton
Dr. Wilson's research activities are in the GIS & Society tradition, with a focus on the social implications of geographic information systems and the development and evaluation of Internet-based mapping solutions for community-based research.

Their combined presence will be a wonderful addition to the Kentucky department. We're going to have some fun!
Matthew Zook at 08:00 No comments:
Share 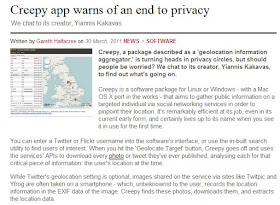 You have to love a software program called Creepy. It is even better if its purpose is to highlight the ability to aggregate someone's location information based on their tweets and Flickr photo uploads.

The goal of its creator Yiannis Kakavas is to both raise people's awareness about how much information they are giving out and provide researchers with a nifty tool.

We downloaded the application and played around with a bit but the results were a bit disappointing. Our twitter ID, Floating_sheep had no geographic references (which incidentally was a conscious choice on Taylor's part) and the other twitter IDs we tried didn't have much geo-information either. We never ran it on Flickr data but suspect that the geo-information would be a lot richer.

In any case, give it a try and don't forget to invest in tin foil futures.
Matthew Zook at 08:00 No comments:
Share

What's up with Montana? Comparing Google and Wikipedia in the US

As mentioned in an earlier post we're starting to have some fun with cartogram representations of geoweb data. For those who have forgotten, cartograms distort geographical areas based on the proportional value of some characteristic.

In the two cartograms below the characteristics used to determine size are (1) Google Maps placemarks and (2) the total number of geotagged Wikipedia articles. The distortion was done at the county level and include the 48 lower continental U.S. states. The coloration represents the relative number of geotags/placemarks by population. This gives a better understanding of the distribution of geotags/placemarks both by population and by area.

While many of the results are expected -- California is bursting with geoweb goodness no matter what the measure -- there are some intriguing differences between the distribution of wikipedia and Google Maps placemarks.

For example, Texas, Florida and North Carolina are bulging with placemarks but slim tremendously when you consider wikipedia entries. In contrast, New York and Vermont seem to have proportionally more wikipedia than Google Maps placemarks.

But the biggest contrast between these measures is Montana whose size balloons tremendously when you move from placemarks to wikipedia entries. We're really not sure what's going on with Montana and so invite folks to take a closer look. We suspect it has to do with someone (or perhaps some automated bots) who were/are extremely dedicated to documenting EVERYTHING in Montana. Interestingly this dedication does not extend to the neighboring states of North and South Dakota or to creating placemark entries for use in Google Maps.

In any case, these cartograms and the case of Montana highlights how diverse each digital layer within any place's cyberscape can be.

UPDATE: Thanks to commenter Mongo for pointing us to the page for the WikiProject Montana, where questions emanating from this blog post have uncovered that a couple of diligent Wikipedians (one of them being Mongo) have been geotagging all kinds of stuff out in the Big Sky country. So thanks for passing the info along and proving our hypothesis about the bots to be wrong!
Monica Stephens at 10:15 2 comments:
Share
‹
›
Home
View web version