As we feature various maps made by other folks from time to time, we thought the recent maps showing the average size of men's (and women's), ahem... private parts, were pretty interesting. Below is a static image of the map of average penis sizes, with a link to the original, dynamic map provided. These maps have been circulated around the interwebs for the last week or so, largely without a critical eye. 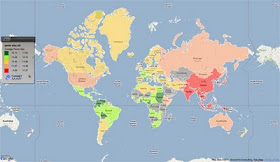 But as has been pointed out since then, the data used in these maps is fairly dubious. The source of the data, Andromedical, is a company that provides solutions to all one's, ahem... enhancement needs. But the link to a company that profits from making men and women feel inadequate is not the only thing that calls this data into question. In the data presented by Andromedical there is no uniform source or method of standardization. In short, there's basically no way whatsoever of verifying the data these maps display.

So why in the world did we feel it necessary to mention this? Well, in addition to participating in the latest Internet meme, we thought it important to highlight the ongoing concerns of accuracy when it comes to neogeography and/or volunteered geographic information (we're looking at you, Goodchild). When anyone can produce and disseminate maps like these online, how are we to tell those that are legitimate from those that are not?

Obviously, not every map mashup or amateur cartographer should be written off automatically, nor even compared to a dubious medical company with intentions to profit off of people's lack of sexual self esteem. But the fact that this map was passed around the web so quickly -- if nothing else than for it's "oh, wow" factor -- points to the ease with which misinformation about any topic can be spread, so long as it's through the means of a colorful choropleth map mashup (not, as Time Magazine called it, a cartogram).

So in the end, these maps are simply another example of how maps distort size. But rather than area distortion based on map projections, it is simply the old standby of using questionable data.
Taylor Shelton at 11:37 No comments:
Share 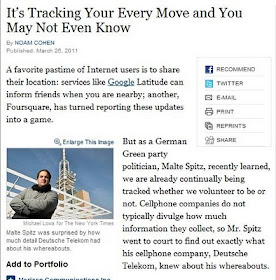 There is a nice article in the NY Times on how cell phone records provide extremely detailed records of spatial location.

The key thing here is that this information is constantly collected. In order for a cell phone to work properly it needs to know which cell tower is closest and will provide the strongest signal.

This does not require that the user do anything (accept a cookie, turn on GPS tracking, etc.) but have a phone with them.

This is something that we've known for a long time but this is a nice and easily accessible article (i.e., great for teaching) on the topic.

The newspaper Die Zeit made a great visualization of the location information for Mark Spitz (a Green Party politician). Well worth checking out. It is in German. Here's the same page embedded in Google Translate from German to English.
Matthew Zook at 07:02 1 comment:
Share

Heatmap of Wikipedia articles: the concentrated geographies of history

Gareth Lloyd has put together a brilliant visualisation of all geotagged Wikipedia articles.

Even more fascinating is this video, showing the data mapped out over time and space:

There are, unsurprisingly enough, quite similar patterns to those found in the maps that we made of Wikipedia biographies mapped out by century. Early concentrations in the Mediterranean, and then an explosion of interest in the rest of the world in the last few centuries. This data gives us a fascinating insight into just how spatially concentrated our knowledge of history is. Tomorrow I'll be giving a keynote talk at the no)Boundaries Graduate Student Conference organized by the Department of Geography at Penn State.

My talk is scheduled for 4 pm and will be in the Deike Building (Room 22) at the College of Earth and Mineral Sciences.

If you happen to be in central Pennsylvania I hope to see you there.
Matthew Zook at 15:15 3 comments:
Share

A Gravity Sink in Wyoming? A Cartogram of Google Placemarks in the U.S.

One of the visualization techniques that we're beginning to work with are cartograms (thanks to Monica) which distort the size of an area based on some characteristic. We decided to do this with the number of Google Maps placemarks in the image below (we strongly recommend clicking on it to get the bigger version).

This cartogram helps to visualize the density of the geoweb within the U.S. although other measures such as Wikipedia entries produce fairly different images. Not all geoweb data is created equal. 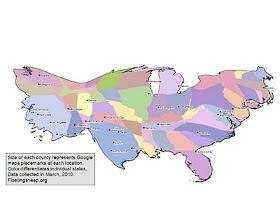 This cartogram was created using the total number of placemarks at the county level so the distortion is at that scale rather than the scale of the state. This is very clear for the area of Illinois around Chicago which bulges out relative to the rest of the state. The west coastal region is another good example as is the area around Boston.

At the other end of the spectrum is the contraction in the upper mountain west and great plains. Although we recognize the power of labels and are loath to characterize regions solely based on our maps, there really seems to be a bit of informational gravity sink (aka black hole) in the center of Wyoming. Perhaps it would be best for those in the region to strap down their iPhones lest they be drawn into it.
Matthew Zook at 08:33 No comments:
Share

Expansion to the Floating Sheep Collective 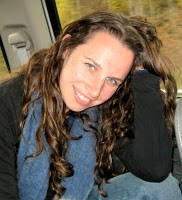 We're quite excited to announce that the FloatingSheep collective is expanding. Monica Stephens, a Ph.D. student from the University of Arizona who is spending the semester at the University of Kentucky, has graciously agree to join this rag-tag band of cyber-geographers. Monica's own research is focused on the geo-visualization of online social networks so expect to see some of that over the next months/years.

But we're most excited by the fact that Monica is a meister of mapitude and a wizard of wonkability. Which means we will be passing along some really cool geo-visualizations of floatingsheep data.

Building on our previous post about Twitter profanity, we recently found Chris McDowall's brilliant visualisation of 24 hours of tweets:

The geographic concentration of information production through the Twitter platform is to be expected (i.e. Western Europe and the US coasts glowing brightly, and Africa largely left out of these processes), but amazing to watch in action nonetheless.

As Chris points out, we can see Indonesia (particularly Java) producing an unexpected amount of content. Well, at least unexpected until we realise that Twitter is enormously popular in Indonesia. The country apparently has world's highest proportion of internet-users on Twitter.

We've been a bit preoccupied with the autocomplete stuff as of late and have been skimping a bit on the strange maps. So, to set things in a different course (for a bit) we wanted to repost the map of Twitter profanity that Daniel Huffman created. You may have seen it about a month ago but we thought it was worth highlighting again. 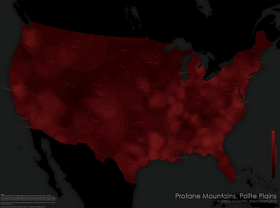 Especially for a zoomed in look at Kentucky which looks a little more profane than Ohio. Not sure if that's something to lament or celebrate. 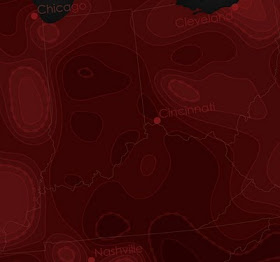