Children's educational television shows make everyone a bit nostalgic, regardless of when one grew up or which particular show was their favorite (I'll always be a bit partial to Ringo Starr and George Carlin as the conductor on Shining Time Station). But with the characters of these shows becoming more fully integrated with the brands they represent, a seemingly endless number of opportunities are available to promote one show over another. 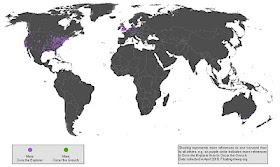 Using the traditional Floatingsheep method of comparing Google Maps references to a number of keywords in order to highlight where one keyword is prevalent over many others, we've mapped references to Sesame Street classic Oscar the Grouch and 21st century bilingual girl-wonder, Dora the Explorer.

The homogeneity of references can only mean one thing: because of her connection to a younger, presumably more hip and technologically adept fan base, Dora has cornered the virtual market of Google Maps. Alternatively, we could chalk this up to the lingering ambiguity of where exactly Sesame Street is.

Regardless of this, Oscar is likely in a trash can somewhere complaining about the biases of our method and how maps don't really represent reality.
Taylor Shelton at 10:30 1 comment:
Share

Today's map is a visualisation of all 34 million geotagged Flickr images. The data were kindly collected by Eric Fischer and then aggregated to the country-level (an operation that took our computer about three weeks to process!). 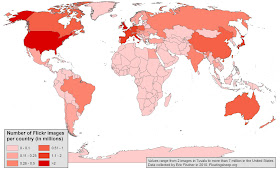 Our paper on the use of volunteered geographic information in response to the Haitian earthquake, co-authored with Sean Gorman of FortiusOne, has just been published in World Medical and Health Policy.

Be warned. This is an educational moment. You might learn something. After all it can't be all fun and correlations. The abstract and links to the paper are below.

This paper outlines the ways in which information technologies (ITs) were used in the Haiti relief effort, especially with respect to web-based mapping services. Although there were numerous ways in which this took place, this paper focuses on four in particular: CrisisCamp Haiti, OpenStreetMap, Ushahidi, and GeoCommons. This analysis demonstrates that ITs were a key means through which individuals could make a tangible difference in the work of relief and aid agencies without actually being physically present in Haiti. While not without problems, this effort nevertheless represents a remarkable example of the power and crowdsourced online mapping and the potential for new avenues of interaction between physically distant places that vary tremendously.

Or, if you don't have institutional access, you can find our paper here.

Also two Floatingsheep-style maps before and after the earthquake are below (and are in the paper). By the way, Haiti is on the western portion of the island of Hispaniola, the Dominican Republic is on the eastern side.

Cyberscape Before the Earthquake 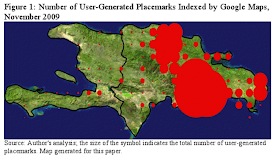 Cyberscape After the Earthquake 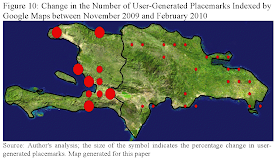 Obesity, Beer and Christianity: Or Correlation does not equal causation

One of the basic rules in statistical analysis is that correlation does not equal causation. But in the hot days of a Kentucky summer one often gives into temptation, especially if the graphs look good.

We therefore leave it to our readers to jump to the unsupported causal relationship. Sorry, you'll have to work/think through this one yourself. 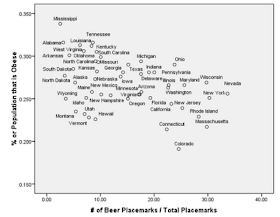 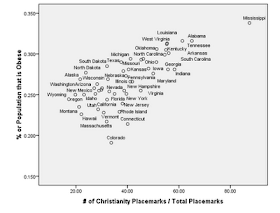 Although the nature of the graphs invite one to believe that Christianity is somehow responsible for obesity this is no doubt a spurious correlation. It is well known that obesity and religious practice are strongly related to income. One can see this in which states are clustered at the extremes.

Why places with a high percentage of beer reference are less obese is a bit more difficult to explain.

Recapping our Predictions for the World Cup or Why Floatingsheep rocks!!

Now that the dust has settled after the world cup it is time to reflect on our predictions. Our language sensitive ranking system based on geo-coded references to football/soccer correctly identified three out of the final four countries in the world cup. The only error was predicting England over Germany. Although one can suspect foul play from the English member of the Floatingsheep collective, there is a methodological explanation as well. 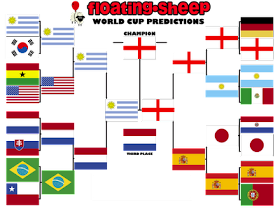 Our searches are limited to land, as there are very few placemarks in water. While this works in a general sense, it does exclude references to football by a country's aquatic citizens. While this is miniscule in most cases, the case of Paul the Octopus suggests that Germany may have a sizeable underground (or better phrased, underwater) population of football enthusiasts that were missed in the data.

Or maybe Mark just cooked the data so England would win. Still you could have done much worse if you used our predictions.

After all, using our system we did make about $17,000 dollars via offshore betting. Unfortunately, we have already spent it all on gumdrops, Botox and aquavit. Clearly we're just not cut out for life in the fast lane.
Matthew Zook at 10:30 1 comment:
Share

As many of our readers have pointed out, a key issue with the methods that we have been employing for some of our maps is that we usually only conduct searches in English. With that criticism in mind, we have decided to perform a search for eight words (food, mother, house, land, family, love, water, sex) in sixty-six languages that are commonly spoken in Europe (we are limiting the search to Europe for the time being).

But to do this we need your help. We'd like to ask all of our readers to take a quick look at our spreadsheet of languages and suggest appropriate translations for any of these words in any languages that you know.

We are well aware that in some languages the selection/spelling of words depend upon the context and grammar. So there will be comparability issues, but we'd like to give it a try anyway.

You are welcome/encouraged to record your name in the comments section of the spreadsheet, and we may even send a floating sheep t-shirt to some of the most prolific contributors.
Mark Graham at 10:30 2 comments:
Share

Liberal, conservative and the Kansas surprise

To any critical thinker, such a question should seem reductionist. And, well, it is. But since it's incredibly hard (nee impossible!) to map an entire world worth of possibilities, we should just embrace the nature of the map and all of its reductionist tendencies and get on with it. 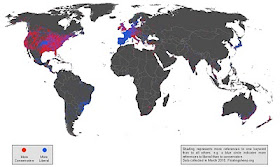 The short answer is, well, a lot of things. For one, contrasting these terms is extremely problematic because it excludes such a wide range of alternative political views that lie either between or outside of this dyad. Second, the question of locality is important, as the political meanings of liberal and conservative are often subject to place-specific interpretations, not to mention the projection of personal preference. Indeed, it could be easily argued that many 'conservatives' in the western world actually adhere to liberal political philosophy, broadly writ. And we don't even need to start with the debate that what most Americans call liberal would be considered right-of-center in many parts of the world.

Even assigning the colors red or blue to each term is problematic, as each color is interpreted differently in different countries. For instance, in the USA, red is associated with the conservative Republican party while blue is the color of the more liberal Democratic party. In the UK, however, red is the color of the left-of-center Labour party and blue the color of the Conservative party. And don't forget the reason "red" is also a noun.

The contrast between the U.S. and Europe is striking. With the exception of the UK and Italy, Europe contains many more references to liberal than conservative in its geoweb. Standard linguistic and spellings issues apply for non-English speaking countries but nevertheless the differences are intriguing and correspond to expectations, i.e., on the whole Europe has a more "liberal" political bent the U.S.

What is unexpected is the big blog of "liberal" references right in the middle of the U.S. Taking a close look, this cluster conforms perfectly the the border of the state of Kansas, a state known for its conservative shift over the past decades. Color us confused. We're hard pressed to come up with a solid hypothesis as to what's going on here so we'll suggest a couple more off the wall ones.
Where's Glenn Beck with all of his ridiculous charts when you actually need him?
Taylor Shelton at 06:00 11 comments:
Share

Wikipedia and Internet Use

In contrast, countries with higher level of per-capita internet usage tend to have far lower rates of Wikipedia article per 100,000 internet users (e.g. the United Kingdom (70) and France (67)). While it is entirely possible that the high rates of articles per internet users in some countries is an indication of dedicated Wikipedia editors, it seems instead more likely that Myanmar, the Central African Republic and most other nations with low levels of internet penetration are being represented by editors from outside of their boundaries. 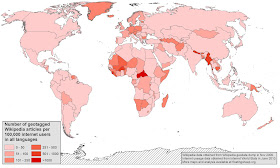 What began as an effort to understand the representation of agricultural production in Google Maps placemarks has become an exercise in how much the world loves coffee, tobacco and oranges [1]. 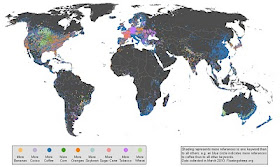 Apparently a lot. Or at least a way lot more than they like soybeans. Especially China where the entire country seems awash in a jittery caffeine spill that is slowly seeping down into Southeast Asia.

Of course, the fact that we didn't include rice in our search terms makes these results problematic to say the least. Sigh. I'd like to blame Taylor for this one, but I think that this was my list. Still what's the point of being a grad student if you don't get stuck with the blame? Right?

Still there are some interesting patterns, especially in the English speaking world. In Australia for example, one can see clusters of sugar cane references in the Northeast tropical region surround Cairns where sugar cane is an important crop. The bands of coffee around the coast (and over New Zealand) are no doubt referencing to the drinking of said crop rather than the growing. 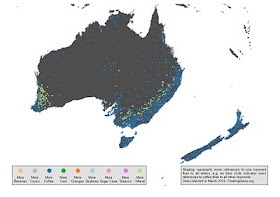 Likewise, when we pare down the nine crops to the four which are actually produced in quantity in the U.S. -- corn, wheat, soybeans and tobacco – some intriguing patterns emerge [2]. The tobacco producing regions of Kentucky and the Carolinas emerge and there is clear a transition from corn to wheat as one moves westward and northward. Just as exists in the material world 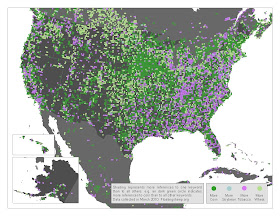 Next post, we'll take a closer look at some of the other regions of the world (Latin America, Sub-Saharan Africa and South Asia) that also have some interesting distributions of references to crops. Particularly since these places often have very few placemarks at all….stay tuned.

[1] As in previous maps, each location is colored according to which search term in Google Maps produced the highest number of results.

[2] OK, we ditched oranges as well since there is clearly a color related issue. Why can't it be called something distinctive like Apelsin (the word for oranges in Estonian) that would remove any confusion. After all, Apelsin doesn't seem like any other common fruit name! Right?
Matthew Zook at 10:00 3 comments:
Share
‹
›
Home
View web version