Following on from the last post, here are some examples of Google placemark inequality:
First of all, China offers perhaps one of the most striking examples of regional disparities. Beijing, Shanghai, and the Pearl River Delta Region all are characterized by heavy information densities. In other words, a lot of information has been created and uploaded about these places. However, much of the rest of the country has very little cyber-presence within the Google Geoweb. In the map below, the height of each bar is an indicator the number of placemarks in each location. 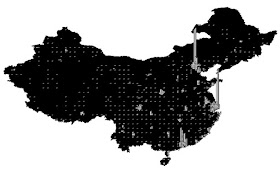 The U.S.-Mexico border along the Rio Grande river offers a similarly striking contrast between high and low information densities. 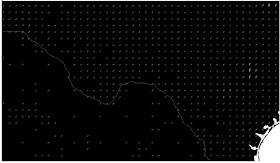 The border between North and South Korea offers another example of placemark density not being correlated to population density. For obvious reasons, very little information is being created and uploaded about North Korea. In the map below (top), each dot represents 100+ placemarks. Interestingly, there are strong similarities between the map of placemarks on the Korean Peninsula, and satellite maps of lights visible from the Peninsula at night (bottom). 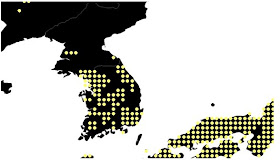 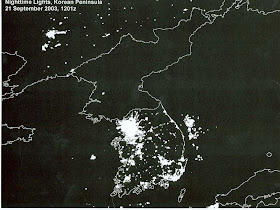 image source: globalsecurity.org
Information inequalities are clearly a defining characteristic of the Geoweb. Some places are highly visible, while others remain a virtual terra incognita. In particular, Africa, South America, and large parts of Asia are being left out of the flurry of mapping that is happing online (e.g. the Tokyo/Yokohama metro region has almost three times as many 0/1 placemark hits (923,034) as the entire continent of Africa (311,770)). Some of the geographical implications of cyber-visibility and invisibility have been examined in part (e.g. here and here), but there is clearly a lot more to be discussed. In particular, because Google allows any keyword to be searched for (not only "0" and "1"), we are able to explore not only the raw amounts of information attached to each place, but also the contents of that information.
Mark Graham at 07:57 1 comment:
Share

The following map shows the intensity of google placemarks on a global scale. Using custom-designed software, a dataset was created based on a 1/4 degree grid of all te land mass in te world (rougly 250,000 points). For eac point a searc was run on te numbers “0” and “1” in order to create a baseline measure of te amount of online geo-referenced content in eacplace. In the below map, every place with more than 100 placemarks is highlighted with a yellow dot.

The same method was used to create a map that highlights every place on the globe containing more than 1000 placemark hits:

When compared to a map of population density (see the map below), the distinct geographies of placemarks become apparent.

These maps suggest that the GeoWeb is far from being a simple mirror of population density or human activity. Online representations of the physical world are highly concentrated in North America, Western Europe, and the more affluent parts of East Asia and Australasia. Maps displaying placemark density on regional and local scales will be explored in more detail in the next post.

Over the last few years a range of terms dealing with the links between cyberspaces and physical spaces have been popularised. The Geoweb, Volunteered Geographic Information, Maps 2.0, Neogeography, Code/Space, and Digiplace all symbolise some aspect of the changes that are occurring to the ways that Geography is both represented and experienced.

The increasing availability of spatial data and the rise of Web 2.0 applications have helped produce a previously unimaginable collection of online spatial information. Hundreds of thousands of people from around the world are creating, uploading, and sharing reviews, guides, images, videos, stories, and descriptions that have one thing in common: they have been tagged to some point on the Earth’s surface.

User-created geographic data represent more than just a simple online database of maps. They instead create another layer to the physical world; they become a component of our understandings of place and, as such, influence the ways in which we move through and interact with the rest of the world.

Our research project therefore focuses on understanding how the Geoweb is structured, and the effects that it has on the offline world. Some examples of questions that we hope to explore both empirically and theoretically include:

This blog will serve as a sketch pad for these, and other, questions. New findings will be posted, discussed, and left open for comment. More soon....